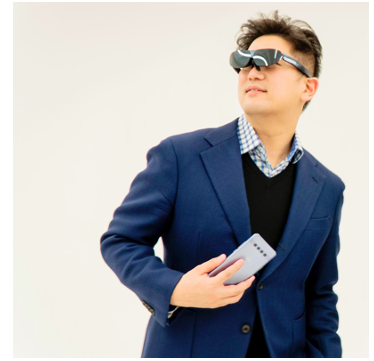 Danny Bae, An Expert In The Business World, Is Taking That Expertise To The World Of Virtual Reality – And Giving Consumers An Opportunity To Upgrade Their Realities And Their Lives

Danny Bae is the mastermind behind Global Platform Solution, or GPS, a company that is changing the way people communicate, learn, grow and experience life with VR and AR technology – while empowering people to participate in a new commerce that’s growing at a rate of 30 times over. At just under a year old, GPS is still in its infancy stage, yet the company is already revolutionizing technology (and perhaps the world).

“After launching in the U.S. in June 2020, GPS quickly became the number one Virtual Reality headset direct selling distributor in the world, having already disturbed tens of thousands of VR devices into the marketplace. Additionally, we launched the world’s first VR personal development platform, which today features over 840 Master Academy Classes and over 200 entertainment options – and counting. From there, we launched a series of eCommerce products – a portfolio that is continuing to grow,” Danny states.

Yet it appears the best really is yet to come for GPS – with Danny at the helm. Earlier this month, GPS launched the MOLED G – the world’s first Micro OLED Glass. The MOLED G was developed by TCL and is available exclusively from GPS.

“The MOLED G from TCL will take both reality and virtual reality to new dimensions. It features a 1090p Full HD display developed by SONY and gives wearers the feel of a 100-inch screen yet fits in the palm of their hand. And Virtual Reality has never seen a headset quite like this – it’s sleek and lightweight – like a pair of fashionable, high-end sunglasses, yet provides a completely immersive viewing experience,” Danny explains.

Because the MOLED G is powered by the TCL 10 Plus smartphone, it’s able to be lightweight while remaining powerful and taking advantage of the smartphone’s NXTVISION curved AMOLED display.

“The phone’s curved display, combined with 5 cameras, stunning video quality and a smooth rounded design, makes the TCL 10 Plus unlike any other phone on the market,” Danny explains.

Danny is no stranger to the world of business and technology, with more than 20-years’ experience under his belt. Just a few lines on his resume that he shares with us prove just how much his business has been able to blossom.

“I moved to the United States at the age of 14 from South Korea. I became an entrepreneur at the age of 17 while in school studying music. Today I have over 20 years’ experience in the Direct Sales Industry both on the sales development side as well as internal corporate side. I have generated over a billion dollars in revenue working in sales, marketing, international expansion, business development and leadership development and have developed and trained hundreds of thousands of independent entrepreneurs and built businesses acquiring millions of customers worldwide. I’ve been invited to speak and train in 16 countries around the world with combined audiences of more than 400,000. Most recently, I’ve used my experience to start my own company in the direct selling space – representing a culmination of a vision over two decades in the making,” Danny remarks.

And while all of these accomplishments are certainly impressive, success has never been about a number or a dollar amount. For Danny, success means far more.

“Success is about – people…. about how you make them feel. Did you make someone’s life better by being in it? Did you push them to become the best version of themselves? Did you share your blessings enough? If I can be successful in my own life, for my own family, that’s amazing. But if I can show other people how to be a success too, how to change the course of their lives for generations to come – well that’s what it’s really all about.”

After so many years of success, Danny has some advice for those who wish to begin their own businesses. He wants them to know that it will not be an easy path and that they should not expect to open their doors and reach financial success overnight, but rather that a good, strong business takes years of work – and most importantly, perseverance.

“If you expect any part of starting a business to be easy, you are going to be disappointed and you are going to be out of business before you even open. Starting a business will test your ability to persevere like nothing else. The hits will come – and they will keep coming – yet you have to be willing to keep moving forward no matter what. Remove quitting from your vocabulary, because if quitting is even a small possibility in your mind, then you’re giving yourself the option to fail. Starting a business when you have money is tough. Starting a business when you don’t, well that’s even tougher. There’s a reason the majority of new businesses fail. The best thing you can do is put on your suit of armor, adopt a ‘what can go wrong, will’ mentality, and then push forward one step, one day at a time,” Danny advises.

GPS has a lot of exciting new things planned for this coming year, so to make sure you don’t miss any of them, follow Danny on instagram here and check out the GPS website here.