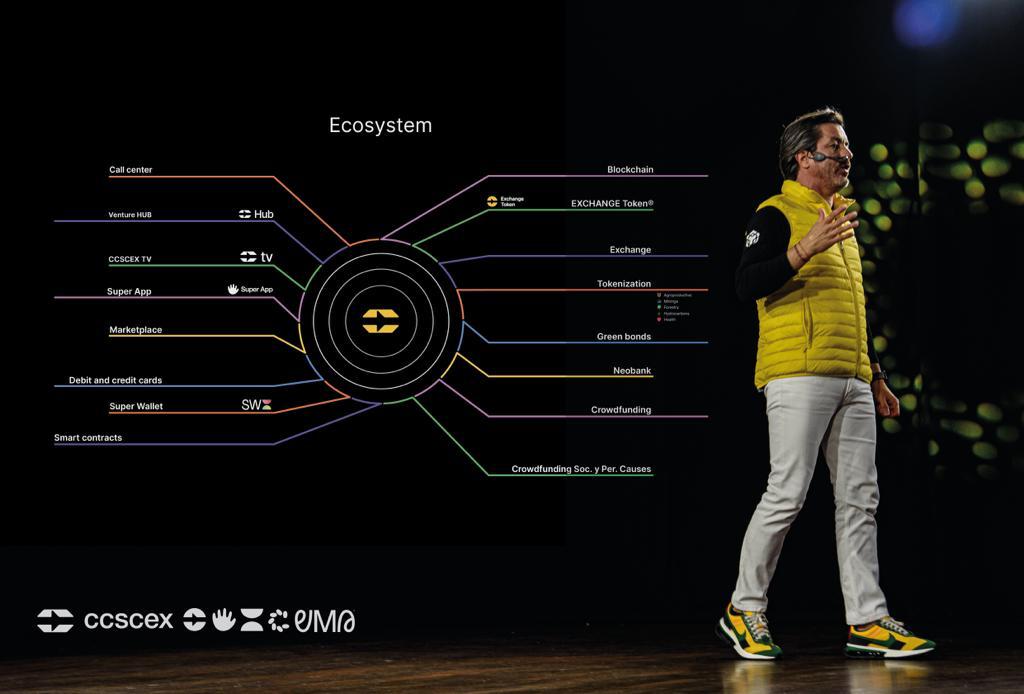 In a world where the specter of recession and the collapse of the global economy seems to be the most likely future, a visionary Venezuelan professional and entrepreneur, based on the immense wealth of his country, offers an opportunity to take advantage of the global storm that seems to be coming.

In these adverse conditions, it seems that the creativity and drive of Venezuelans has no limits, this Venezuelan businessman is in the process of developing an ecosystem within the very modern world of cryptocurrencies and commodities, a vision worthy of great minds like Steve Jobs’, with the development of the Apple ecosystem.

Daniel Valero G., founder, Chairman and CEO of CCSCEX | CARACAS COMMODITY EXCHANGE, with a research technique created by him, I.M.I, spent 8 years to create the world’s first commodity exchange with blockchain technology, with its own security token.

Perhaps some still do not understand the importance of this creation, since the world of cryptocurrencies is so new and changing, that it is difficult for us to keep up with it, but not for this Venezuelan businessman, in which his vision is to project the world of the cryptocurrencies and commodities of Venezuela at a regional and global level.

With a pioneering vision, Daniel Valero G. plans to connect the world with the large volumes of commodities that Venezuela possesses, using the traceability blockchain, process audits, sources of financing, means of payment and much more. The most interesting thing about this platform is that it will allow any Venezuelan or global citizen to participate in an easy, fast and transparent way in crypto active trading operations, commercialization and exchange of commodities (not securities), operations that were limited in the past to the big financial operators.

This new vision is located at a distance of more than 8 years ahead of its closest competitor and transforms how the world economic system is currently being managed, democratizing it to levels where the population has the same opportunity to produce wealth as the large holders of world capitals. The union of many small investors can compete and be successful in large financial operations that previously only a few corporations had access to. In a world as changing as the current one, only those who return the power to generate wealth to the citizens themselves will succeed and this can be achieved in a space for technological entrepreneurship such as the Caracas Commodity Exchange.

Democratizing investment is a vision where the small contribution of the majority manages to create investment funds to develop commodity businesses, such as the sustainable exploitation of minerals, agricultural crops, forest exploitation, hydrocarbon exploitation, sustainable ecology projects, green economy and circular, and with this innovative project it will now be available to everyone.

The cornerstone of this ecosystem is the Exchange Token, backed by the commodities produced in Venezuela and that can be used by millions of people in more than 180 countries, through a collaborative system, which will allow them to enter these big businesses, and with a small investment, giving you the opportunity to access these markets, previously reserved only for large capitals.

The Exchange Token is a Security Token that is the digital representation in the blockchain of a real world asset and that is also regulated, giving it value in the physical world, since a real world asset supports it, therefore that each one of them that is issued is guaranteed. To date, more than 4 million Exchange Tokens are supported, out of a maximum supply of two hundred million of them.

CCSCEX plans to carry out the STO (Security Token Offering) of this valuable tool, and at the same time launch the platform and ecosystem between the months of December 2022 to January 2023, in an event that promises to be one of the largest events on Blockchain technology and Venezuelan commodities.

The CCSCEX ecosystem: What is it?, What is it for? And its advantages

If you have a smart cell phone, tablet, a desktop computer or a laptop, it is very likely that you already know what a digital ecosystem consists of. However, it is possible that you have several applications, and that you have not yet discovered all their advantages.

We could say that the concept of technological ecosystem is a fairly new term in the world of consumer technology, although it is true that ecosystems themselves have always existed. Thus, when we talk about an ecosystem in a sector as innovative as technology (computing, telephony or crypto), the most common thing is to refer to a series of devices and applications that are differentiated from each other, but that work and connect together, combining them to provide a series of advantages to their users.

Although CCSCEX is not the only technology company that has an ecosystem, it is the only one in the world of commodities and cryptocurrencies that has managed to become the most innovative, and it has done so for different reasons. The CCSCEX ecosystem has been able to encompass all the services and tools, including the various functions between devices and applications that link any user in a collaborative way. The CCSCEX ecosystem allows the participation of entrepreneurs, companies and developers within its platform in an open and transparent manner.

These products and services work very well with each other, for example, in the case of the blockchain, it offers transparency and audit traceability; the Exchange Token, grants governance to the ecosystem, and offers transactional solutions and financing sources, such as Tokenization, Crowdfunding and smart contracts, which encompass the rights and duties between buyer and seller; The SW | The Super Wallet, the Exchange, which is used for the exchange between fiduciary currencies (Fiat), Cryptoactives and Commodities; Debit and Credit Cards supported by the VISA franchise; Super App that encompasses Marketplace; the Entrepreneurship Hub and a Call Center with customer service that will be attended 24 hours a day, 365 days a year, it should be noted that the entire platform works in more than 21 languages.

It remains to be seen if Daniel Valero G. and his ecosystem will be able to break down the barriers that separate ordinary people from big business and take a step towards the decentralization of wealth, but for now, the brilliant idea of freeing the world from Venezuelan riches, it looks tremendously attractive and only the decisions of millions of people will be able to place this startup at the level of the great technology companies in the world, making many people fulfill their dreams of guaranteeing prosperity for themselves and their families, CCSCEX will be the next Latin American unicorn company.

“Those who are crazy enough to believe they can change the world are the ones who change it”, Steve Jobs.